(b Pecuj, 12 Feb 1897; d Belgrade, 11 Jan 1967). Serbian architect, teacher and urban planner. He graduated in architecture (1923) at Prague University and settled in Dubrovnik in 1934. After World War II, he became Director of the Institute for Urbanism and, in 1948, a professor at the Architectural Faculty at the University of Belgrade. His main works include the Masaryk Centre (1928) near Prague; the Yugoslav Students’ Centre (1932) in Prague; the Grand Hotel (1936) on the island of Lopud; and several villas in Dubrovnik. He was also successful in numerous architectural competitions: Complex Terazije (1930; unexecuted), Belgrade; a beach resort and a hospital (both 1932; unexecuted), in Split; and, in Belgrade, the headquarters (1946; unexecuted) of the Communist Party of Yugoslavia, the Tasmajdan Museum complex (1948), and the Ministry of Defence (1953). Dobrovic also led a team that developed an urban plan for Belgrade (1947-8; unexecuted). He was mainly preoccupied with architectural compositions that display very dynamic forms, and with their relationship to larger urban complexes.

(b Vrsac, 25 May 1887; d Belgrade, 10 June 1965). Serbian architect. He studied (1907) at the Technical University in Budapest and received a diploma (1912) from the University of Belgrade. From 1912 to 1918 he worked in Budapest, on the design of theatres, public buildings and private villas, exhibiting his projects with the progressive group Oblik (Form). After World War I he opened his own practice in Belgrade. Up to 1930 he followed the middle course of Central European eclecticism, thereafter developing an interest in a decorative form of Modernism, a kind of formalism where perfectly functional elements are articulated for purely decorative reasons. This produced modern architectural massing, decorated with plain cornices, window frames and facings concealing structural members. He received the International Grand Prix for Architecture for his Yugoslav Pavilion at the Exposici? Internacional, Barcelona (1929). His main works are the Chamber of Commerce Headquarters (1930), Belgrade; the Air Force Headquarters (1935), Zemun; the State Printing Works Building (1938), Senjak; and many blocks of flats. Other buildings include the Workers’ Chamber (1933) and the Government Building (1939), both in Novi Sad. After World War II he designed many new workers’ housing settlements in Serbia and the Hotel Metropol (1955), Belgrade. The Officers’ Headquarters at Dedinje, Belgrade, shows signs of regression into Serbian folk eclecticism.

Make your own banner at MyBannerMaker.com!

Da vidim da li uopšte neko dodje - Is there anybody outa there? 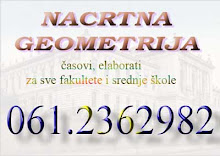 Odakle sve dolazite? – Where are you from?